A young Clonmel, County Tipperary, dancer is dreaming big for 2020.

Rachel, who is the daughter Miranda and John, currently holds three world medals. Her family, friends and dance teachers at On Your Toes feel the sky’s the limit for the talented 14-year-old, who dreams of moving to London for transition year to pursue her passion.

“I was never interested in hurling and football when I started school,” Rachel tells TipperaryLive.ie.

“Dancing was different, and I started dancing competitively when I was five-years-old and knew this was what I wanted to do. I trained hard over the years, and I got to travel Romania for the Dance World Cup in 2015, which is the biggest dance competition in the world. We had gone to the two previous competitions as spectators, and it became my dream to dance at the Dance World Cup. I invented a performance called ‘Dream’ and I won my first gold medal,” the  contemporary and lyrical dancer fondly recalls.

Following a 2019 which also saw Rachel receiving a European industry award for best lyrical dancer, in addition to claiming a slow dancer of the year award at a freestyle competition in Mayo, she has recommenced a rigorous training programme with a dream move to London in mind.

“You get knock-backs in dancing but you have to push through them. Dancing isn’t recognised as a major sporting event, but dancers have to train constantly. I have had to put a lot of work into my physical fitness in the gym to be a dancer, which is something I don’t think people realise. Circuits, core work and cardio fitness. Gillian Hewitt-Fitzgerald and Majella Forte at On Your Toes have been very, very supportive over the last 10 years and make sure I’m ready for every competition,” she says.

“Moving to London would give me a taster before I go and commit to being a dancer full-time when I finish school,” she adds.

Videos of Rachel dancing are on our school Youtube here.

They often say that you learn more in defeat than in victory and last weeks Senior Munster Semi-Final defeat really paid dividends today.  Our junior footballers took to the field with a point to prove and that they certainly did. Mitchelstown got the better start to the game with a couple of attacks but only converted one chance which was from a free, this was the only time they would have the lead in the game as CTI Clonmel took a stranglehold of the game and never let go. CTI Clonmel’s opening score came from the boot of one of the youngest players on the field Michael Prendergast. This was followed by a rally of scored from Michael O’Sullivan (2-0) and Oisín Forristal (0-3). During this period our forwards were extremly dominant and had a large number of goal chances, some of which were taken by Michael Prendergast, Jake Maunsell, Sean Cagney and Cian Power. Between the goals we had points scored by Jake Maunsell, Oisín Forristal (0-2), David Cagney, Sean Kenny and Sean Cagney.

With a comprehensive lead at half time we made a number of changes for the second half. The players who came on had a point to prove and showed very well. We opened the scoring with a point from Keenan Kerton – our very own Thomas Ó Sé! This was followed by 1-2 from Luca Dennehy who showed very well when he was moved to full forward. Mitchelstown got into the game a bit more in this half and scored 1-2 during their period of dominance. When CTI got back on top we had Keenan Kerton contribute to the score sheet again with another point from wing back before John Molloy got our last goal of the day. The game finished with a point from the ever energetic Sean Cagney.

There were stellar performances all over the pitch and some excellent team play displayed throughout. This victory was just what the lads needed after the heart wrenching defeat last week. 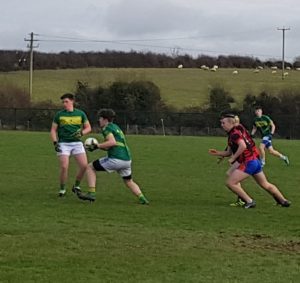